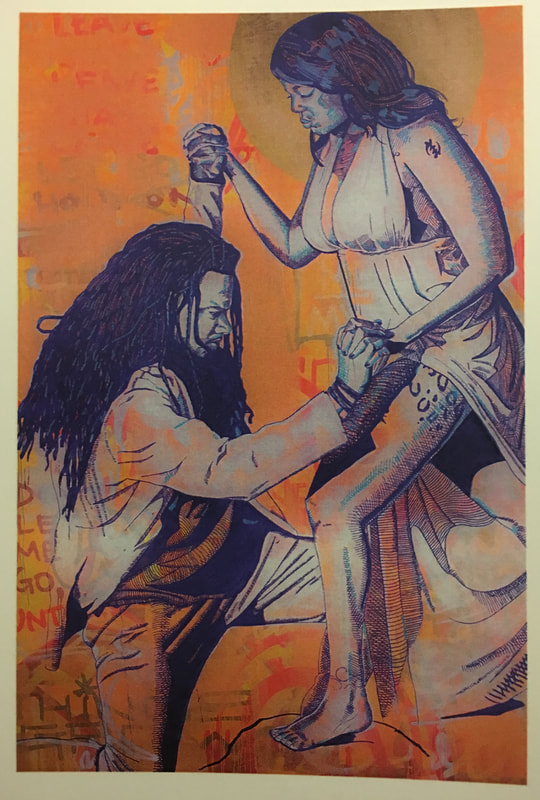 This moment in Genesis got my full attention a few years ago because, as someone new to the Bible, prior to digging into it I was profoundly confused as to who Jacob was.. and his relationship to Israel. Once I began to understand, it has always captured my interest because of the tension between each of us as an individual and each embodying a nation. God is the LORD of all angels, hosts, beings, while also the God of me, of you, of Jacob.

"The LORD of hosts is among us
The God of Jacob is our fortress."
Psalm 46:

​Here is an outline of the story up to the night which BMIke chose to interpret:

Isaac then fathered Jacob and Esau, twins. Jacob came out second, holding on to Esau's heel as they moved into the light. "Jacob" means both "he takes by the heel" and "he cheats" and both turn out to be true.

Jacob is a relentless cheater. He cheats Esau out of his birthright and their father Isaac's blessing. Because of this trickery, when facing a confrontation with Esau many years later, Jacob is terrified, assuming Esau wants vengeance and has 400 men with him. The story picks up at night after hearing Esau's people are fast approaching him and his family:

"That same night Jacob arose and took his two wives, his two female servants, and his eleven children, and crossed the ford of the Jabbok. He took them and sent them across the stream, and everything else that he had. And Jacob was left alone. And a man wrestled with him until the breaking of the day. When the man saw that he did not prevail against Jacob, he touched his hip socket, and Jacob's hip was put out of joint as he wrestled with him.

Then he said, "Let me go, for the day has broken."
But Jacob said, "I will not let you go unless you bless me."
And he said to him, "What is your name?"
And he said, "Jacob."
​
The he said, "Your name shall no longer be called Jacob, but Israel, for you have striven with God and with men, and have prevailed.
​Then Jacob asked him, "Please tell me your name."
But he said, "Why is it that you ask my name?"
And there he blessed him.

So Jacob called the name of the place Peniel, saying, "For I have seen God face to face, and yet my life has been delivered."
The sun rose upon him as he passed Penuel, limping because of his hip. Therefore to this day the people of Israel do not eat the sinew of the thigh that is on the hip socket, because he touched the socket of Jacob's hip on the sinew of the thigh.

​And Jacob lifted up his eyes and looked and behold, Esau was coming, and four hundred men with him. So he divided the children among Leah and Rachel and the two female servants. And he put the servants with their children in front, then Leah with her children, and Rachel and Joseph last of all. He himself went on before them, bowing himself to the ground seven times, until he came near to his brother.
But Esau ran to meet him and embraced him and fell on his neck and kissed him, and they wept." (Genesis 32:22-33:3)

​This brings up a questions that BMike's painting addresses in its own way. ​
This would be so different from never birthing out of "religious" ideas and habits taken on in our youth or being in rebellion without self-examination; however, it substantiates the "changed forever" moment so characteristic of annoying churches who insist on people just "accepting Jesus" to be saved. As superficial and dumb those moments may seem, there is truth in the tremendous phenomena of those moments, sometimes completely invisible and "beyond the veil" at the time.

I took the third step, surrendered my life in 1984 in a San Fernando Diner parking lot at midnight after too many hot chocolates... and it changed me forever; why?... because it initiated my decision to embrace a "design for living" for the balance of my days. God as I do or don't understand God is my God, my Friend, my Spirit, my Source. That unalterable decision did happen at a very specific moment in time.

That decision has led me to be a an almost-anonymous member of a community, of a mystical body, of a “host,” of a “nation.”
Alma's Blessings