Saying 9
Jesus said: Look, there was a man who came out to sow seed. He filled his hand with seed and threw it about.  Some fell onto the road and birds ate it. Some fell onto rocks and could not root and produced no grain. Some fell into patches of thorny weeds that keep it from growing, and grubs ate it. Some seed fell upon good soil and grew and produced good grain. It was 60 units per measure and  120 units per measure.

Reflection on Saying 7
We "take, eat" his body in order to be in Him, with Him, through Him. We are crazy to the rest of the world, living a story that has no bearing on reality, useless.
And yet this Lion, a Lion is blessed when I eat it. As James Baldwin said in an interview with Nikki Giovanni,
"I claimed God as my Father.
God is our responsibility.
God's only hope is us.
If we don't make it, he ain't gone make it either."
The lion becomes human through me. Yeshua exists through, in, and with me. Agunachemba, "The Lion that Watches over the Universe."
And yet, eaten by this Lion, I am cursed. Why? Because I did not eat it, choose it, consume it, allow it to be in me... and therefore it coexists with my un-surrendered self and tortures me. I live a woman divided, a house divided, and I can not stand. Our Big Book calls it "alcoholic torture." I have experienced that both as an active alcoholic and sober woman.

​
Reflection on Saying 8
The fisherman is "full of thoughts," thoughtful.
So many distractions! The "little fish" are what keep me from paying attention to what matters, God’s will in the moment. As my grandfather said to me just before he died, "Don't waste time with what is not important."
Wise words.
Without discernment, I'm scattered chasing too many little fish. Just find what is important and choose it, choose to love, to be in relationship to others, God, and myself.
The little fish are all the things my pride and ego thinks are needed any given day, what I want…
I have been recruited by a spiritual experience I didn’t expect, to “feed sheep, feed lands, and tend sheep.” Pick up the phone, draw up a chair, take time with that person, listen, be in community,

Reflection on Saying 9
The hard road might be the status quo, packed down from use; powerful ingrained beliefs systems prevent growth: know-it-all-ism, pride, the egoic operating system.
The birds might be the instruments of the status quo, authorities and any people that benefit from preventing "emancipation from mental slavery; " they snatch away the seed, the potential for awakening, for new life.
The rocks prevented other seeds taking root deeply enough.  The seed took but hit rocks  which might be calamities on the journey such as accidents, deaths, betrayals, disappointments. The initial enthusiasm of a surrendered life fades. The plant topples.
The weeds choke some that have grown strong. The weeds might be the cares and glitter of the world. Preoccupied, I start out well and root down, but loose God's message in the cacophony. Everything becomes a priority; job, family, self-care, activism, looking, smelling, feeling good.  Strangulation.
The good soil is a person who is ready and stays free of the rocks and weeds and brings others aboard,. The rocks and the seeds of the weeds had to have been cleared. Maybe there was care put into the preparation of the soil. Pain removes rocks. Bad experiences remove the seeds of the weeds. So all the soils were necessary in order to finally become the seed that produces good grain.
Sayings 10, 11, and 12 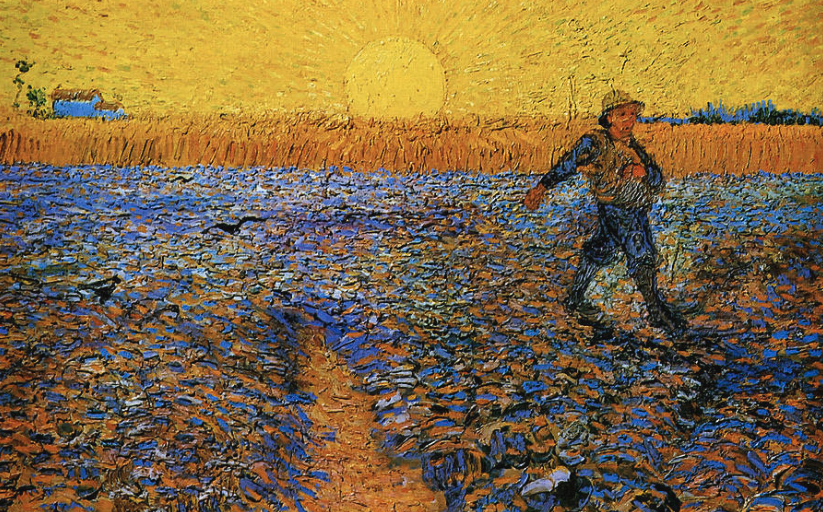