Saying 16
Jesus said, "People think, perhaps, that I have come to throw peace upon the world. They don't know that I have come to throw disagreement upon the world, and fire, and sword, and struggle.
​For there will be five in one house. three against two. Two will oppose three. The father will oppose his son and the son oppose his father. And they will stand up and they will be alone."
"Mama may have, Papa may have
but God bless the child that's got his own,
that's got his own."
When Jesus is told that his mother and family have arrived, he challenges.
“Who is my mother, and who are my brothers?” And stretching out his hand toward his disciples, he said, “Here are my mother and my brothers! For whoever does the will of my Father in heaven is my brother and sister and mother.”
The "two" of Saying 16 may represent the parents. The older generation versus the younger, the mamas and the papas versus the children.
My strongest desire as a parent is to protect and love my children; that was perfect, for a brief time in their early lives... yet my children must "get their own." NOT easy. There MUST be disagreement, fire, sword, and struggle. Each person can not have an intellectual or habitual relationship with God, but rather a personal one. Each one must stand up, "alone."

This vital release into rebirth may involve children "leaving the nest" or parents "shaking the nest." In either case, the letting go is the ultimate act of trust in God and NO ONE can avoid it. I come from a family of 5 ("three" and "two") so this saying is particularly relevant. Babies work hard to be born when leaving the uterus. Likewise, we work for our independence against the beliefs, values, and paradigms that our parents instill in order to find our way to ourselves as children of our Living Creator. Disagreement is imperative. Standing alone is essential to enter the Kingdom and our spiritual family. In the Old Testament, birth family and geneology is everything where in the New Testament, the disciples separate from their birth families, are identified by the city of their spiritual fellowship and do not even bury their dead to follow Jesus.
Saying 17
​Jesus said, I will give you that which eyes have not seen, ears have not heard, hands did not touch, and minds have not conceived.
​It's in plain site but unseen; within earshot but unheard; accessible but beyond our consciousness, always. There is always more God, a deeper healing of a rift so huge we spend a lifetime connecting, disconnecting, reconnecting.
​
Many of us say the set aside prayer, "God, please set aside for me everything I think I know about you, me, the steps, life, death, so that I might have a new experience with you, me, the steps, life, death..." It's a prayer for an open mind, to see beyond what we know. The ego is so powerful it tells me that there is nothing beyond my current experience but Jesus says that's WRONG. More will be revealed, always.

I believed for the very first time at a specific point in time that I clearly remember.
I was alone in my barren studio apartment, just outside the opening into the tiny kitchen. My fifth step was completed and I had just returned a check for $500 to my father after seeing the need to surrender my financial dependence, to become a person "whose got her own."  I felt my life depended on that surrender. I was flipping through a paperback, and out came a $100 bill.
I "stood up" at that moment and faith claimed my heart, beyond my head - "God, I believe."  I just knew at that moment. From Jesus in Saying 18, I hear that I will also know with the same clarity at the end of my earthly life when I, too, like Jesus, will know that I will never die. 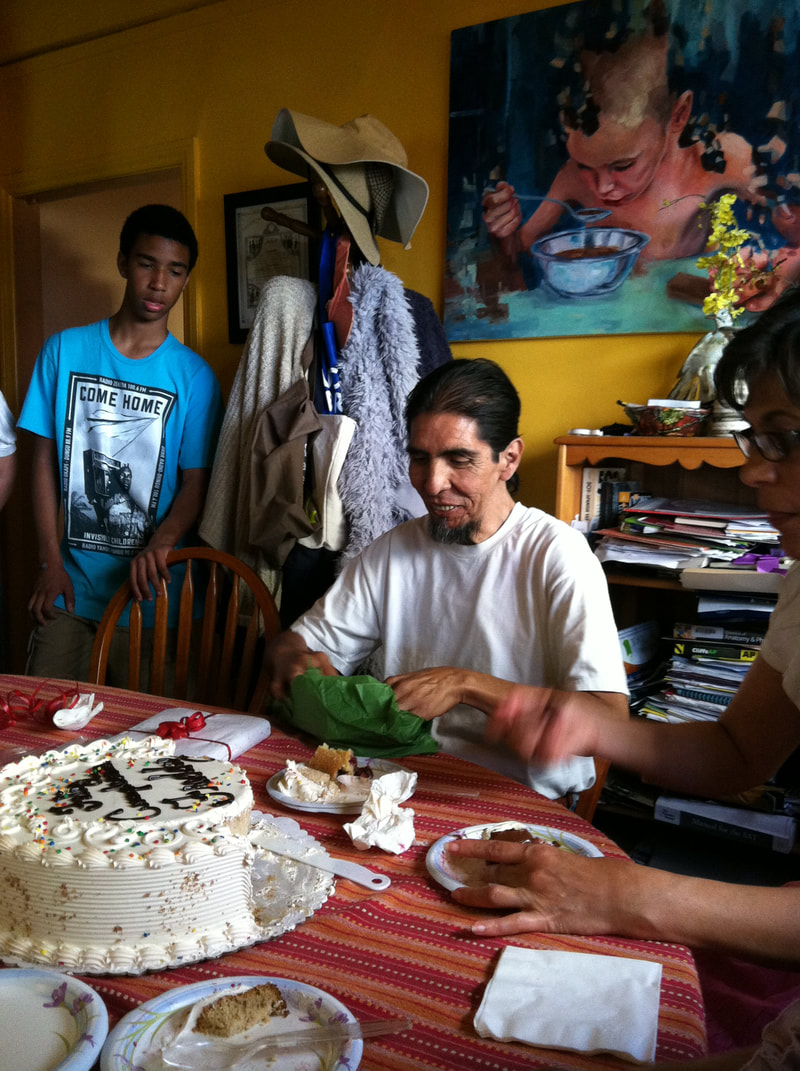 Images from that Last Birthday Party in May. He died in August.