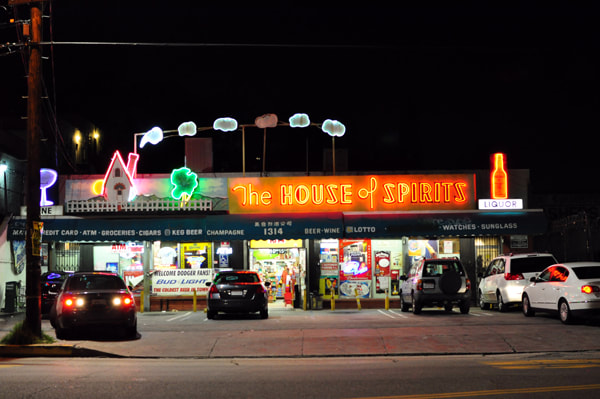 Below are two short examples of Jesus' teachings and explanations of why they resonate so deeply with me:

Example 1: The Beatitudes
"Blessed are the poor in spirit for theirs is the kingdom of heaven." (Matthew 5:3)
​​What is Jesus teaching here?
On Echo Park Boulevard in Los Angeles is "The House of Spirits," - not a church.  In Miriam Webster's dictionary, one synonym for "alcohol" is "spirits" and one definition for "spirit" is "alcohol."

That makes sense;  I truly found a spiritual experience in wine, whiskey, etc. that I loved. Drinking set me free and allowed me to be articulate, a city girl, sexy, sexual, adventurous, creative, artistic, defiant, rowdy, or quiet.  It allowed me to get through the loneliness of a rainy afternoon, to celebrate, to take the edge off restlessness, irritability, and discontentedness. But, as my friend Walter says, "Alcohol gave me wings to fly, but took away the sky;" I hit a miserable bottom of hopelessness.

With physical sobriety, I thought the problem was solved.
​
But no, sober I was also "poor in spirit."  That truth was revealed to me abruptly and painfully about 6 months into my sobriety when I felt worse than I could ever remember feeling when drinking. I know now that I needed a spiritual experience - but by that time deeply realized to my innermost core I could never ever drink safely since my experience shows me I have "the phenomenon of craving" once I start to drink. From looking at my thinking about drinking, I also knew there was nothing I could do to protect myself mentally from that first drink during "the strange mental blank spots" that characterize my experience or considering my capacity to justify anything at certain times.  My main problem is in my mind, not my body.

And yet today, I truly feel blessed to be an alcoholic, to be "poor in spirit." Why? Because in the utter failure of my human resources (of which I have plenty) I found a relationship to the God of my understanding and to my fellows that means everything to me. I have found, through the 12 steps, "the kingdom of heaven."

"There is no more "aloneness," with that awful ache, so deep in the heart of every alcoholic that nothing, before, could ever reach it. That ache is gone and never need return again.
Now there is a sense of belonging, of being wanted and needed and loved. In return for a bottle and a hangover, we have been given the Keys of the Kingdom." Sylvia K. as related in the Big Book "Keys to the Kingdom."

​Example 2: The Parable of the Sower 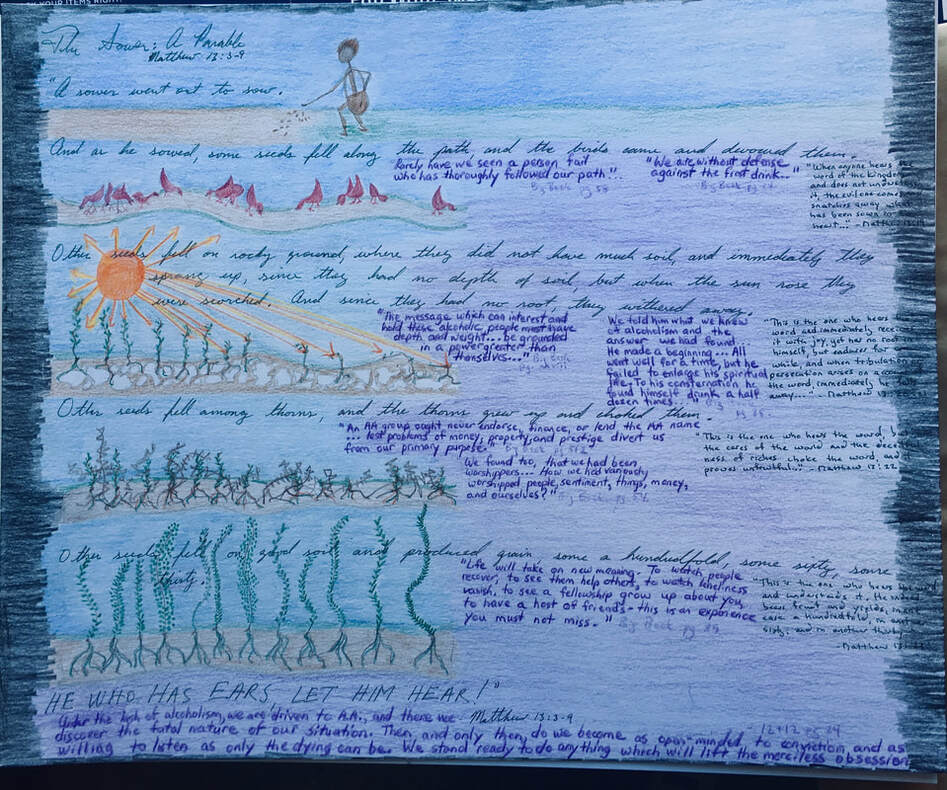 And when a great crowd was gathering and people from town after town came to him, he said in a parable,
"A sower went out to sow his seed. And as he sowed, some fell along the path and was trampled underfoot, and the birds of the air devoured it.
And some fell on the rock, and as it grew up, it withered away, because it had no moisture.
And some fell among thorns, and the thorns grew up with it and choked it.
And some fell into good soil and grew and yielded a hundredfold."
As he said these things, he called out, "He who has ears to hear, let him hear.
And when his disciples asked him what this parable meant, he said,
"to you it has been given to know the secrets of the kingdom of God,
but for others they are in parables, so that seeing they may not see, and hearing they may not understand.
Now the parable is this: the seed is the word of God.
The ones along the path are those who have heard/then the devil comes and takes away the word from their hearts,
so that they may not believe and be saved.
And the ones on the rock are those who, when they hear the word, receive it with joy.
But these have no root/ they believe for a while, and in time of testing fall away.
And as for what fell among the thorns, they are those who hear,
but as they go on their way they are choked by the cares and riches and pleasures of th life, and their fruit does not mature.
​As for that in the good soil, they are those who, hearing the word, hold it fast in an honest and good heart,
​and bear fruit with patience." Luke 8:4-15
A sower went out to sow.
The sower is God. The path is that of the 12 steps.
"Rarely have we seen a person fail who has thoroughly followed our path."

Seeds that are trampled and devoured.
God sows truth in the rooms and in the steps; some people that come to the rooms hear for a moment but their cynicism and disbelief (the birds, the devil) is so powerful that they leave "the path" and often scoff and mock.. .even though at one moment in time they did have a brief experience of new hope, deep identification, or of seeing the truth.

Seeds that land on the rocks.
Again, God sows truth and a person makes a beginning, but isolates and gets rigid and legalistic. There is no meaningful fellowship with others (no moisture),  "Everyone else is doing it wrong!" The person eventually leaves the path.

Seeds that are choked by thorns.
The truth is sown and the person flourishes but, as my sponsor Richard used to say, "The only thing worse for an alcoholic than bad luck is good luck." Maybe the person has a great experience in the steps and starts to sponsor effectively but also gets married and has children. "I can't stay on the path (sponsor, pray, meditate, connect, be of service)  because of my kids (job, relationship- the "thorns")."  Sometimes something happens like a betrayal by a sponsor or a disappointment with a fellow member. That sometimes sends people flying out of the rooms, too.

Seeds that grow and yield.
These are the people that stay and sponsor and grow and stay humble.  I have met saints in AA: Alma, Richard, Jane, Tony, Lisa, Chandra, Carlotta, Al, Ray, Freddy, Ken, Dian, Mike, Alton, Joe, Allen, Janice, Jennifer,... are some of them but there are many many many more.