The "Gospel of Thomas" was discovered in 1945, in Nag Hammadi, Egypt, the same year the atomic bombs were dropped on Hiroshima and Nagasaki.  In green text below is the translation by Stevan Davies, the first three of the 114 Sayings of Jesus from the Gospel.  Folks disagree as to precisely when it was written; the Nag Hammadi text may be from the first or second century A.D. Some scholars are quite sure the original preceded the Gospels of Matthew, Mark, Luke, and John.

Saying 1
And he said: Whoever finds the correct interpretation of these sayings will never die.
​
​
Saying 2
Jesus said: 'The seeker should not stop until he finds.
When he does find, he will be disturbed.
After having been disturbed, he will be astonished.
Then he will reign over everything.

When you understand yourselves, then you will be understood, and you will realize that you are the Sons of the living Father. If you do not know yourselves, you dwell in poverty and it is you who are that poverty.
Reflection on Saying 1
I LOVE these sayings and feel their meaning is accessible through living the 12 steps, a "design for living"  that includes community, prayer, meditation, self examination, service, a life of worship in Spirit and Truth.
Scary to be so bold. Doesn't that lack humility? whatever...
"Never die?"
Well the meaning of THAT will be disclosed as we move through the sayings. These are just thoughts as of January 2022.
May shift, seem off or on ... The hope is that you'll fathom them, too, for yourself.
Though I use the translation by Stevan Davies. I found my own interpretations to be so different that I stopped reading his, and any other commentary, not wanting to be influenced or reactionary...
​Towards the end of writing the first draft, I read "Mary Magdalene" by Cynthia Bourgault and her remarkable thinking and insights hit home and have influenced me.
Reflection on Saying 2
seeker
Keep seeking  til you find truth,  love, God.

disturbed
Pema Chodrun says, "Fear is a natural reaction to moving closer to the truth."
Who wants to see the depth of  society's injustice, cruelty, insensitivity?
Who wants to see the truth of our own capacity for indifference, cynicism, self-centeredness, need for control, powerlessness, approval seeking, the seven deadly sins?.
Very disturbing and seemingly a huge part of the search for God is the uncovering of what is NOT God.

astonished
The truth , God, love, IS astonishing, SO hard to believe: that I am deeply valued as I am, that Earth is traveling 64,000 miles an hour around the sun as we speak, that I am 99% water and a hummingbird's weight of pure energy, that Jesus was a brown or black man who was lynched and returned into his body to bear witness to our true identity as God's eternal children.
Through "cleaning house" God allows me to see the lies ("old ideas") that have been downloaded into my soul (religious, scientific, historical, interpersonal, personal...) which have distorted my image of myself, of God's world, and of others.  ​The "uncover, discover, discard" life has repeatedly led me to experiences beyond what I know, to the greatest gifts of all, a relationship with truth, with a God that demonstrates LOVE in a way that I can comprehend and participate in; that is relentlessly astonishing.

reign
​Once astonished, at times I'm a child playing in God's kingdom, energetically plugged into Power. Practicing spiritual laws, principles one day at a time,  reigning over the inner serpent in the Kingdom within and around us but not of this world.

Reflection on Saying 3
His eyes twinkle, smile ripples. Leaning forward towards the fire as the fish grills and sizzles over an open flame, Jesus listened for quite some time to his brothers and sisters arguing about and expounding on the location of the Kingdom.
Jesus interrupts with a gesture signaling the beginning of a demonstration; soundlessly on his feet, he puffs out his chest and points up in imitation of "the leaders" and booms, "Look, the Kingdom is in the sky!"
Stooping down on the ground again, he whispers dramatically, "Then the birds will be there before you are!"
Standing and assuming once again the chin-up pomp of the leader, he points to the sea and booms, "The Kingdom is in the sea!"
Stooping down with wide eyes, he whispers, "Then the fish will be there before you are."
Stepping out of this enactment, he calmly picks up a stick and pokes the fire as he looks each man and woman in the eyes. The fish sizzles as the skins' fat falls into the flame. Jesus takes a deep breath of the deliciousness; they are all hungry;  he whispers with urgency, "Rather, the Kingdom is within you and it is outside of you." 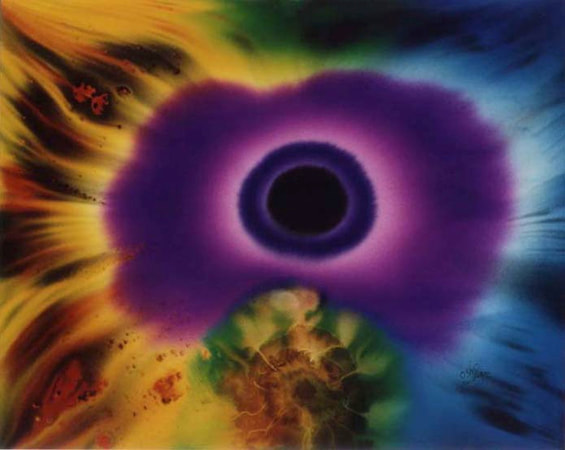